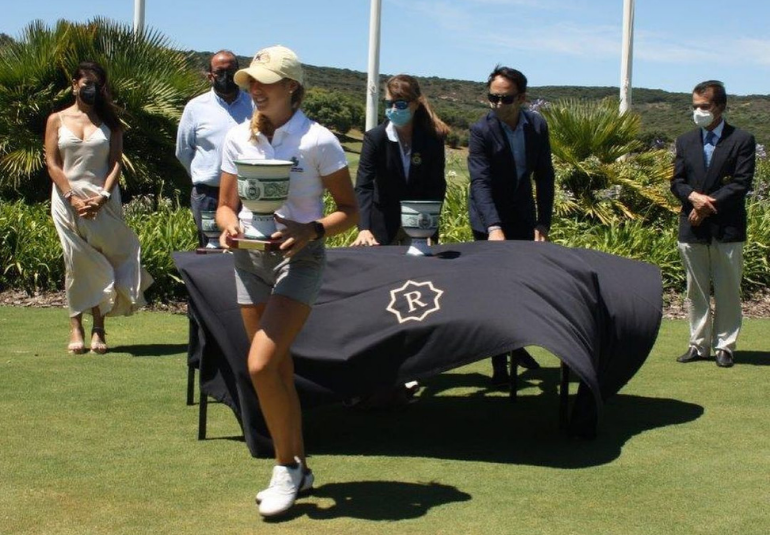 This year’s tournament was held on Friday, Saturday and Sunday, July 2 – 4, at La Reserva de Sotogrande.

Valentina conquered the championship with a three-round total of 213, three strokes ahead of La Cañada’s Julia Sánchez, who placed second in the tournament.

Valentina played Rounds I and II at 69 shots each for a total of 138 shots, (-6). She teed off on her Final Round of the three-day tournament five strokes ahead of La Cañada’s Sánchez, who started her Final Round with 143 shots, (-1).

Valentina is at home for the summer on the Costa del Sol with her family. During the school year, she attends Kent State University in Kent, Ohio in the United States. She plays on the women’s golf team there.

As a junior during the 2020 -2021 season, Valentina played in six tournaments and finished the season with a 16-round scoring average of 75.44 and two top-ten finishes. Plus, she played four rounds at par or better. Her best score of the year was 70, at the UCF Challenge and Florida State Match Up.

Before Kent State, Valentina played her freshman season in Division II at Nova Southeastern University in Miami, Florida. There she was named by the Women’s Golf Coaches Association (WGCA) as Division II Freshman of the Year. With a 70.25 scoring average, she was ranked N° 3 in Division II by the NCAA.

Right now, Valentina is often seen training on the practice hole between Holes 11 and 14 on the championship Old Course. She is usually with her father Giovanni, an Atalaya member, and her fourteen-year-old sister Cristina, who is also proudly sponsored by Atalaya and who is already proving herself to be one of Costa del Sol’s best young lady golfers.