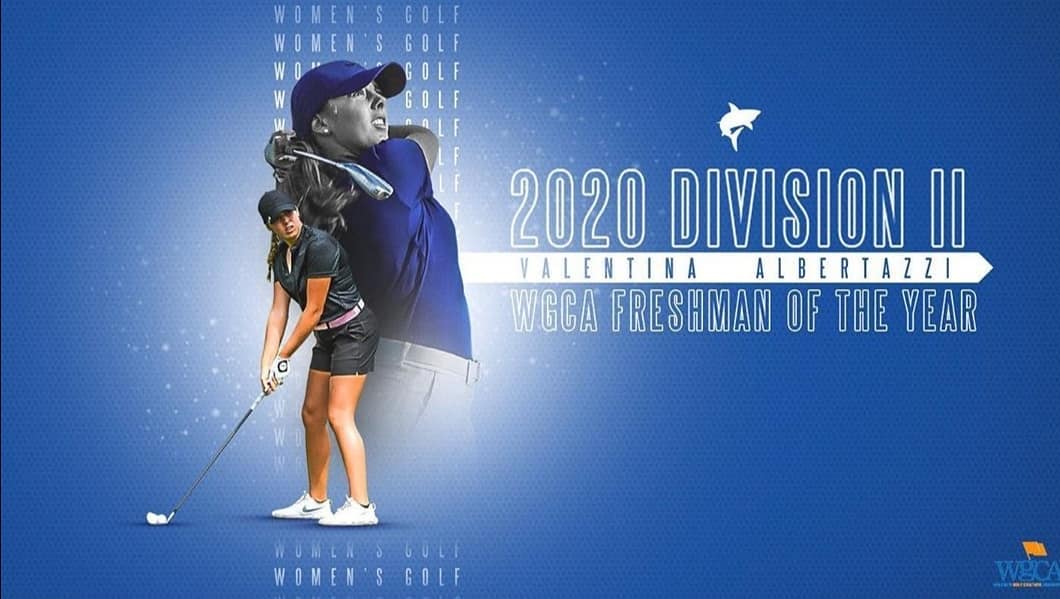 Atalaya Golf & Country Club has sponsored Valentina Albertazzi for many years, and now she has been named the 2019-20 Division II “Freshman of the Year” by the Women’s Golf Coaches Association (WGCA). The announcement was made on Friday, the 24th of April. Congratulations to Atalaya’s Valentina!

Valentina attends Nova Southeastern University in Florida but right now, as a result of the COVID-19 pandemic and the closure of her campus, is temporarily living here on the Costa at her residence located nearby Atalaya Golf.

While at home in Spain, Valentina is continuing her rigorous training regiment. With the help of her father, longtime Atalaya member Giovanni Albertazzi, she has installed a temporary driving range in the family garden. Her training regime is non-stop. Even so, she is counting the days until Atalaya reopens and she is able to train at our expansive practice facilities and play the two championship courses she loves so much.

Valentina is the fifth player in the history of Nova Southeastern’s lady-golf programme to attain the “Freshman of the Year” honour. As a result of her achievement, the school’s lady Sharks have won the title more times than any other university in the United States since the award was first given in 1998.

The Benahavis native strongly established herself during her first collegiate season. She completed the year in the N° 3 position in the Golfstat player rankings (www.golfstat.com), finishing with the highest NCAA Division II ranking amongst all freshmen. She carded seven top-10 tournament finishes and 10 rounds at par or better. She also captured her first career victory, winning the Lady Moc Golf Classic.

As an additional distinction, earlier this month the WGCA (www.wgcagolf.com) named Valentina as a member of the First Team All-American.

About Valentina, Nova Southeastern head coach Heather Walls says: “Val is a very special person, and I am so proud of her. Her relentless work ethic, desire to win, eagerness to learn, and love for her team led to her vast improvement throughout the year. This award is a true testament to the hard work she has put in throughout the season. Receiving this honour is huge, and I couldn’t be happier for her.”

About herself, Valentina tells Atalaya: “Being named Division II Rookie of the Year has been a great honour that has resulted from many hours of practice. This year in the United States playing for Nova Southeastern University, I had the opportunity to work on all aspects of my game, especially the mental and physical aspects. They all helped me a lot as a player, as Atalaya Golf also did during those years I spent there.”

From Atalaya, we say to Valentina: “We at Atalaya take great pride in seeing you grow. We are watching all of your successes, even when you are far away. We wish you many more! We can hardly wait to see you training and playing at Atalaya when our courses reopen.”