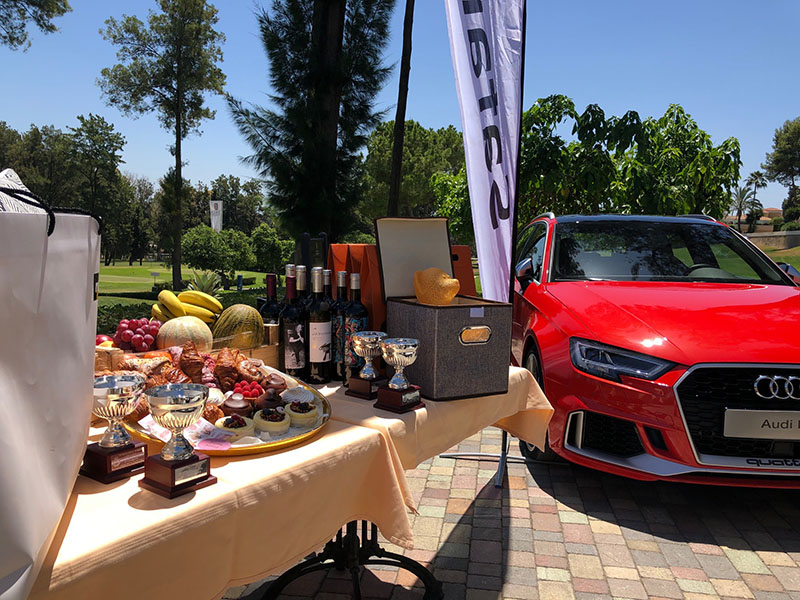 Some 100 golfers from all areas of the Costa del Sol competed in an 18-hole individual Stableford tournament on the New Course. Competitors gathered on the tee boxes of their designated starting holes for a 09h30 shotgun start. In keeping with the theme of the day, the majority of participants were women.

Atalaya’s Enjoy Golf Academy also collaborated by opening its doors to all women interested in learning golf, as well as to those desiring to support “women through golf”.

Atalaya’s former Men’s Captain Richard Phillimore was the proud recipient of “Nearest to the Pin” honours. His prize was an impressive assortment of confectionery delights from Café Les Deux, Marbella.

The day proved to be thoroughly enjoyed by all and was packed with surprises. The first was a very welcome and unexpected sack lunch, compliments of La Sala Puerto Banús and Frutas Eladio. The treat was delivered to all competitors as they were starting their 10th hole of play by Atalaya’s friendly Marshals and Starters, members of the Caddy Mater team. Then, at the end of play, the upbeat sounds of popular Costa del Sol singer Gema Cabanas greeted all as they gathered at the Kiosk, near the Old Course’s ninth green, for their 19th Hole celebrations.

The final surprise of the day was a fabulous tombola. A vast array of prizes, that seemed never ending, was awarded via a scorecard draw. The only requirement was for the winner of each prize to be present to accept his or her gift.

The highlight of the raffle was a draw for the use of a bright red Audi RS3 for a weekend. Scorecards of all players were re-entered in to the lottery to ensure everyone had a chance of winning. This very generous gift was provided by Audi Safamotor, Official Audi Dealers in Málaga, Marbella and Córdoba. The thrilled recipient was Fiona Shaxon, who went home not only with First Place honours in her division of the golf tournament but also with this colossal prize.

Special appreciation is extended to the Royal Andalusian Golf Federation, to Lynn Fisher of Marbella’s G.I.R.L.S Golf Society and to Montse San Francisco, the editor of Ladies in Golf – A Magazine for women with swing. All helped Atalaya immeasurably with the success of this event.

Information about the “global community” that is acting internationally as “one voice” to support both girls’ and women’s golf may be found at: womensgolfday.com