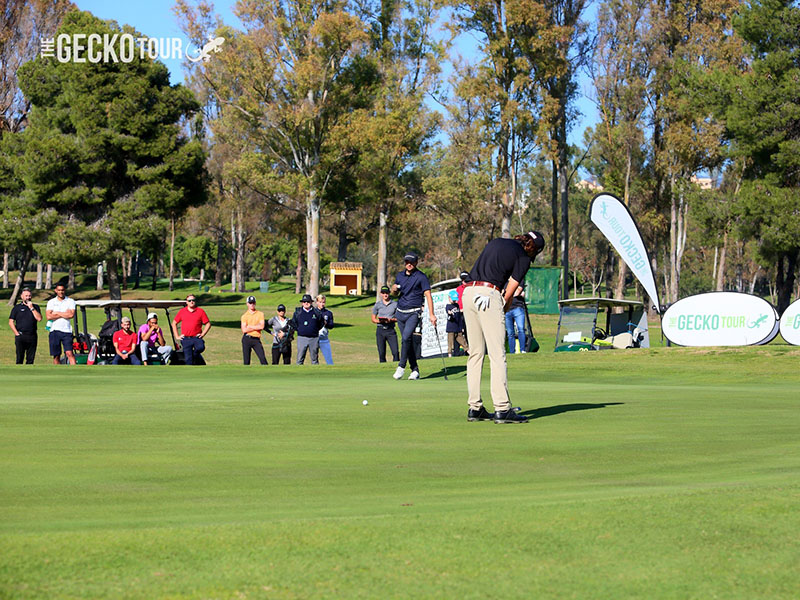 Aspiring amateur and professional golfers from around the world come to the Costa del Sol each winter to train and participate in the The Gecko Tour circuit. The winter-long tournament is held on the Costa’s best courses from Malaga to Sotogrande. Now celebrating its ninth year, The Gecko Tour is gaining the reputation of being: “Europe’s most established Professional Golf Tour in the winter months.” (http://thegeckotour.com/)

Open to “all declared Professional Golfers and Elite Amateurs, both Ladies and Men”, Gecko recently made two return stops at Atalaya Golf & Country Club. On Tuesday, Wednesday and Thursday, the 14th – 16th of January, the Club’s championship Old Course hosted the 54-hole, three-day, Stroke Play challenge. Almost three weeks later on Sunday, Monday and Tuesday, the 2nd – 4th of February, the challenging New Course served as the venue for another three-day contest.

Oliver Lindell of Finland topped the Leaderboard after three days of play during the Old Course tournament. Lindell scored a total of 201 strokes (-15). Now 21 years of age Lindell’s goal is to become well established on the European Tour over the next three years. Of course, his dream is the golfer’s dream of all dreams – winning the Masters’ “iconic green jacket”. (http://www.oliverlindellgolf.fi/web/)

Joe Zawaski of Sweden and Katerina Vlasinova of the Czech Republic tied for Second Place. Each scored a total of 209 strokes (-7). Zawaski turned pro in 2018 and resides in the U.S. state of Illinois. Vlasinova, formerly a member of the Czech Republic Junior National Team, plays for Old Dominion University, in Norfolk, Virginia.

When Gecko returned to Atalaya in February, the Colombian Álvaro Arizabaleta captured First Place after three days of play on the demanding New Course. His final score was an impressive 191 strokes (-22). Now a member of the Spanish Federation, Arizabaleta finished the 2018-2019 Gecko season with three victories and 10 top five finishes out of the 20 tournaments he played. Previously, he won the Gecko Order of Merit two times in a row. These wins provided him with invitations to play at the European Tour Q-School and at some Challenge Tour tournaments.

Londoner Piers Berrington placed Second with 197 shots (-16). In March of 2019, Berrington won The Gecko Tour Grand Final championship played on Villa Padierna Golf Club’s Alferini course. His win was the result of an intense playoff against Christopher Sahlström of Sweden.

Third Place was captured by Casper Simberg of Finland with 199 strokes (-14). Simberg is a member of the Finnish Mens’ National Team. In 2019 he was the best Finnish player in the European Individual Championships and represented Finland in the Euro Team Championship.

The foundation of The Gecko Tour is to provide an “affordable and highly competitive winter golf tournament experience on the Costa del Sol”. The tour mixes youth and seniority, and the result is extremely positive. When seasoned golfers interact with and play against younger players, the older have the opportunity to polish their games and maybe once again think about the European Tour and the younger gain a platform for growth and stepping stones to the future.

Atalaya Golf & Country Club is every year honoured to support and proud to participate in this very worthwhile tournament.

Any cookies that may not be particularly necessary for the website to function and is used specifically to collect user personal data via analytics, ads, other embedded contents are termed as non-necessary cookies. It is mandatory to procure user consent prior to running these cookies on your website.