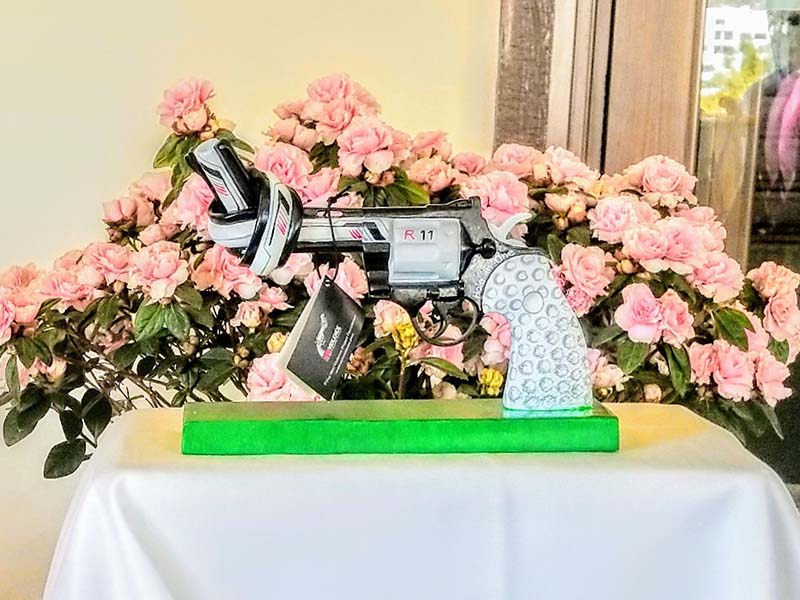 Atalaya’s Third Annual Non-Violence Trophy charity tournament was held on the Old Course on Saturday, the 13th of April. The 18-hole event is sponsored by long-time Atalaya member Clase-Göran Kalborg. Kalborg has agreed to underwrite the event for a total of five years.

The tournament’s format, called “Swedish Medal Play,” is quite different from the normal events played at Atalaya. Competitors regardless of handicap are required to pick up after playing a maximum of five shots over par on any hole.

This year’s Non-Violence Trophy winner is Atalaya’s Men’s Captain Richard Phillimore, who carded a Net score of 66 points. Phillimore is the proud recipient of a limited edition, 19 centimetre replica of the famous knotted gun sculpture.

The replica that Phillimore received was painted by American professional golfer Dustin Johnson. Johnson is one of several well-known celebrities who have decorated their own personal versions of the original knotted gun sculpture crafted by Swedish artist Carl Fredrik Reutersward.

This year more than Euro 350.00 was raised to support the very worthy Non-Violence Project Foundation. The project’s mission is: “to inspire, motivate and engage young people to learn how to solve conflicts peacefully.” For additional information go to: http://nonviolence.com/