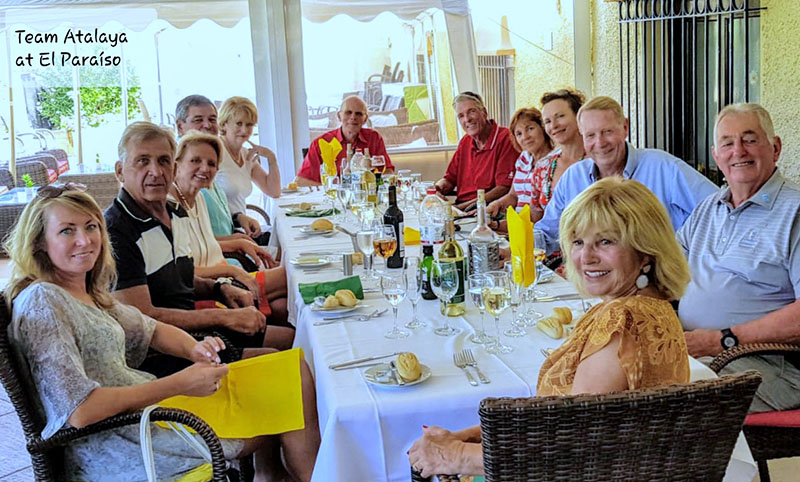 Worldwide mixed pairs golf tournaments are the exception rather than the norm. But for Atalaya Golf & Country Club members, the Summer Mixed Pairs Interclub challenge is a commonplace on the Club’s annual events’ agenda and ranks as one of the year’s most enjoyable Interclub competitions.

This year Atalaya’s players took advantage of their fine-tuned golfing skills to finish the six-match contest tied for Second Place.

Atalaya, Chaparral, El Paraíso, La Cala, Marbella Club, and Santa Maria made up the roster of the clubs participating in the 2019 summer tournament, with each club hosting one event.

At each match six pairs represent each club, although only the accumulated points of the four top scoring pairs from each club are used to calculate each club’s “score-of-the-day”.

With an 18-hole Individual Stableford format, the better score of each pair is recorded hole-by-hole.

For all six matches the program of the day is the same. First, the day’s 72 players gather for coffee. Next, they are escorted to their designated starting holes to prepare for the day’s “shotgun start”. After play and a quick change of clothes, everyone comes together for lunch, enriched by a tsunami of impressive golf stories. Finally, the day’s winners and tournament rankings are announced.

Top scorers for Atalaya at the season’s final match at El Paraíso on Friday were the team of Sirpa Kallela and Joseph Duerrmeyer, who scored an impressive 43 points. Nina and Richard Phillimore skirted in close behind with a noteworthy 42 points.

Team Atalaya’s top score of the season, an extraordinary 49 points, was carded by Baldemark and Basterrechea, at Marbella Club, on the 2nd of August.

Different pairs competed in each match for Atalaya this summer. Mixed pairs captain Richard Phillimore was keen to insure that all who signed up to participate were given the opportunity to play.

Congratulations are in order to Richard for his role in making the tournament such a success and to all of Atalaya’s competitors for a well played season resulting in a Second Place overall finish against very strong Interclub opponents.