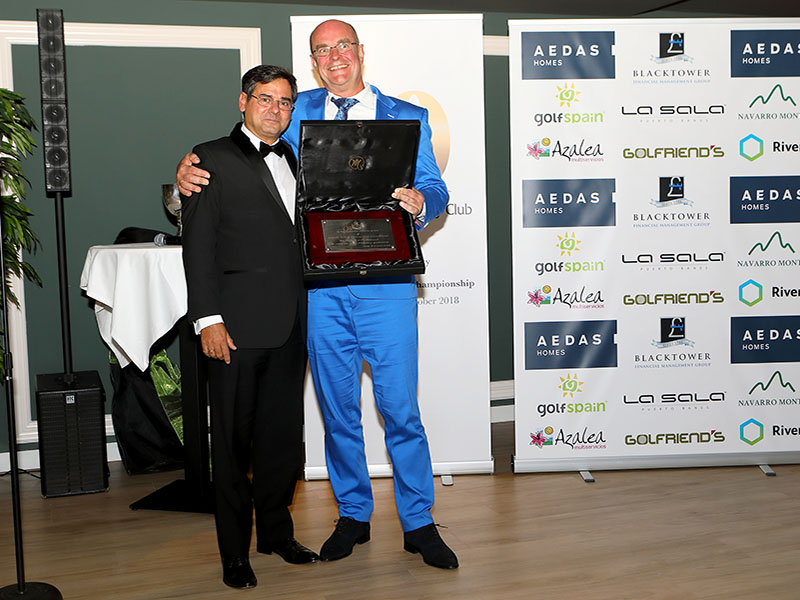 Alexander Hanschke, President and Board Chair of Atalaya Golf & Country Club Internacional S.A., kicked off the festivities by welcoming all attendees and reminding everyone of the significance of the evening’s venue. Had it not been for the need in the early 1960s by the original Atalaya Park Hotel, now called the Marbella Estepona Atalaya Park, to provide a golf venue for its guests, Atalaya Golf & Country Club might never have become a reality. What better place could have been chosen to celebrate Atalaya’s 50th Anniversary!

The evening Gala served as the culmination of a weekend of celebration for Atalaya. Featured also was the playing of the annual von Limburger Open Championship. The 36-hole Medal Play challenge, recognized as Atalaya’s most important yearly tournament, is an open tournament which welcomes all federated golfers. This year’s competition attracted a field of more than 100 aspiring competitors, many of whom were from clubs other than Atalaya. Difficult pin positions and less than perfect weather on both days created most challenging playing conditions for even the tournament’s lowest handicappers.

With a history that dates back for more than 20 years, the von Limburger Open Championship has gained the reputation of being one of the Costa del Sol’s most prestigious golf tournaments. The event is always played on Atalaya’s Old Course to honour the memory of the course’s designer, renowned German golf course architect Dr. Bernard von Limburger.

Dr. von Limburger’s daughter Verena Thost, herself an accomplished golfer and long-time Atalaya member, presided over this year’s prize giving ceremony during the Gala on Sunday evening. Mrs. Thost awarded some 8,000 Euros in prizes to the tournament’s best players.

The 2018 von Limburger Open championship and the von Limburger Open trophy were awarded to Atalaya member Philip Fisher, who carded a gross score of 162 over the tournament’s two punishing rounds. With a two-day score only one point behind that of Fisher, Second Place went to Atalaya’s sitting president Michael Pollak, and Ruben Lopez placed Third, carding a two-day score merely one point behind that of Pollak.

Atalaya’s Old Course opened to the public as a green fee venue in 1967; however, it was not until the fall of 1968 that the course was accepted by the Spanish federation. In those early days the rich and famous were quickly attracted to play at Atalaya. Peter Alliss, Sean Connery, and Christopher Lee - just to name a few - were regular guests.

As the years passed the desire evolved for Atalaya to grow into much more than simply a trendy golf hotspot. Regular players wanted the Club to become their golf home. As a result the company began selling membership shares in the early 1980s.

Then, in the late 1980s the inspiration evolved to build the New Course. The concept was to provide variety in the golfing experience offered by Atalaya to both its members and green fee guests.