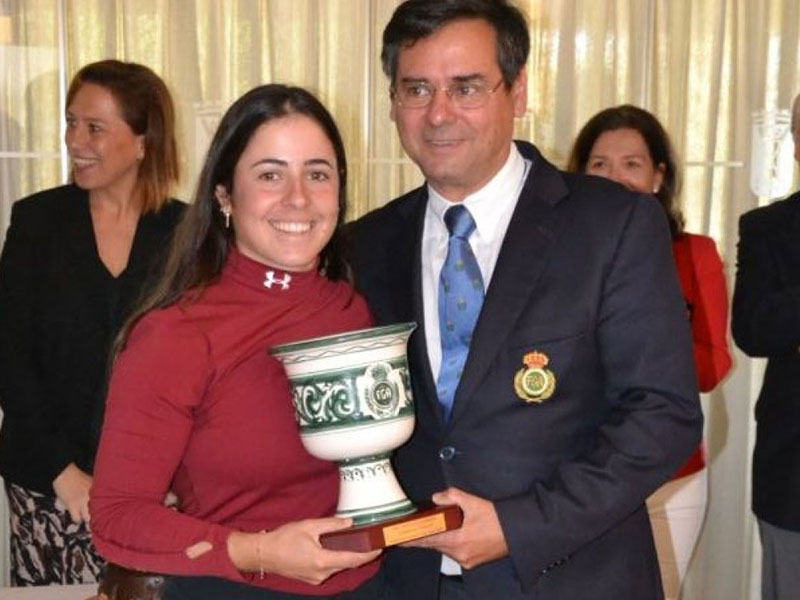 The 2020 winner of the Women’s Andalusian Cup is Ana Peláez from Malaga. The four-day tournament was played on Atalaya Golf & Country Club’s championship Old Course from Thursday the 9th through Sunday the 12th of January. More than 80 lady amateurs from Spain, Europe and the UK participated.

Peláez finished a very challenging Day One round in First Place on the leaderboard. Carding 69 points, she never looked back. She maintained her commanding position and remained in the tournament’s top slot throughout the next three days of play. She scored another 69 on Day Two, a 73 on Day Three, and again a 69 on Day Four. Amazingly, the rising star played under par on three of the tournament’s four days. Her consistent play provided her with a very impressive four-day total score of 280 strokes.

Almeria’s Marta López walked away with the tournament’s Second Place honours. López, after six birdies and only one bogey, signed a spectacular final-round card of 67 strokes and finished the championship only four strokes behind Peláez. Her total score was 284 strokes. López’s strong finish is testimony of her unyielding determination to win.

The podium’s Third Place was captured by France’s Orphee Burgnard. Carding 71 strokes on the final round, Burgnard’s four-day total score was 285, merely five strokes more than that of champion Peláez.

On Day One after a disappointing bogey on the first hole, tournament champion Peláez was quick to assure that this setback was her only mistake of the day. She proved her point by capturing four birdies and finishing the round with 69 strokes, three under par.

Unfortunately, Day Three turned out to be less than sterling for Peláez. She signed a 73-stroke card. Although unhappy with her errors and especially her double bogey on Hole Two, she hung on to her number one position on the leaderboard and started her final round two strokes ahead of the Basque Oihana Etxezarreta.

Peláez is a student at the University of South Carolina in the United States. Before this most recent Women’s Andalusian Cup win, she placed first at the 2016 Madrid Women’s Championship held at Golf Santander and received as a college freshman in 2017 medallist honours at the NCAA Columbus Regional. She also contributed significantly to the triumph of Spain in the European Under 18 in 2015 and, more recently last summer, to the silver medal in the 2019 European Team Absolute.

The best of aspiring amateurs from Spain, Europe and the UK participate in the Women’s Andalusian Cup. The tournament provides these young golfers the opportunity to earn points in both the Amateur World Ranking and in the Absolute, U18, and U16 Women’s National Rankings. According to Pablo Mansilla, President of the Royal Andalusian Golf Federation, the Women’s Andalusian Cup attracts a very strong field. The tournament is Andalucia’s second most important and prestigious tournament for lady amateur golfers.