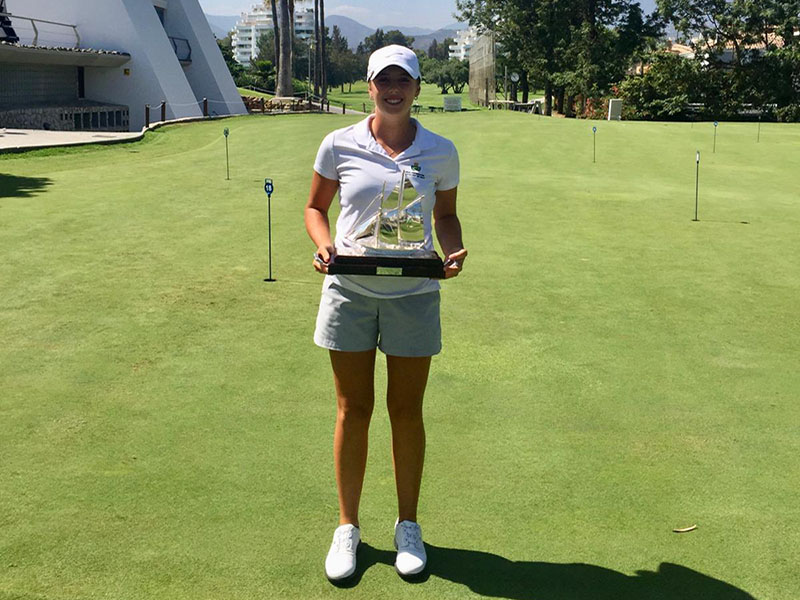 The aspiring and talented amateur golfer Valentina Albertazzi walked away with first place Ladies’ Division honours at the Norberto Goizueta Memorial. The four consecutive day, 72 hole, stroke play, scratch challenge was held from the 15th through the 18th of July on the South Course at the Real Club de Golf Guadalmina. This year’s tournament attracted 120 male and female players.

Valentina, who is proudly sponsored by Atalaya Golf & Country Club, carded four impressive rounds of 69, 73, 67 and 77 for a total score of 286 (-2) to secure her position at the top of the leaderboard. Valentina finished four shots ahead of Second Place winner Ana Amalia Pina of the Real Club Sevilla Golf.

For the men Alvaro Revuelta of Madrid placed first with a final score of 280 (-8). Three shots behind and tied for Second were Álvaro Mueller-Baumgart of Malaga and Pablo Rodríguez-Tabernero of the Real Club Sevilla Golf.

During the award giving ceremony, Valentina and Alvaro were presented with the coveted silver schooner trophies which are awarded each year to the tournament’s two champions.

The Norberto Goizueta Memorial serves as a tribute to its namesake and founder of the Real Club de Golf Guadalmina. Inaugurated in 1959 on Guadalmina’s South Course, the tournament has grown to become one of the most important events on the annual Andalusian amateur golf calendar.

The competition is a “Counting Event” in the World Amateur Golf Ranking system, (WAGR). The WAGR ranks the top amateur golfers in the world based on each player’s average performance over a 52-week rolling cycle.