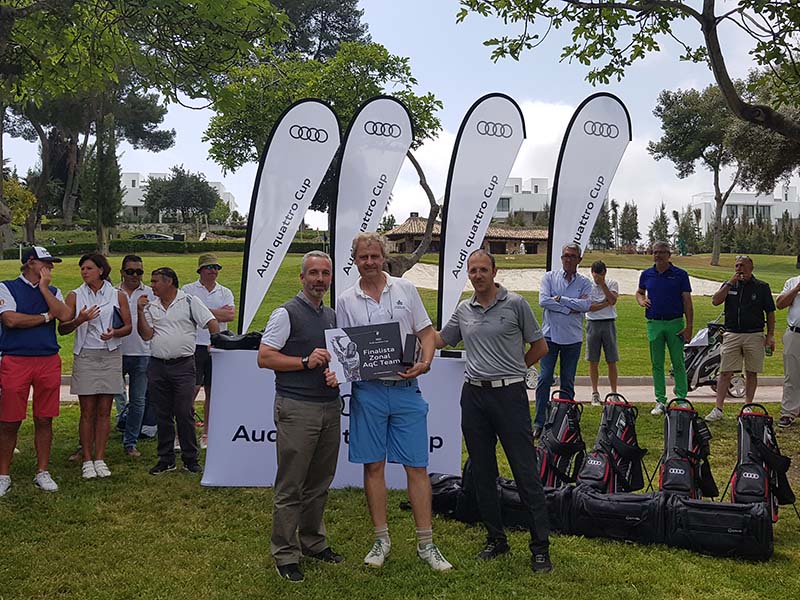 With a myriad of golf courses available in southern Spain, it is a great honour for Atalaya Golf & Country Club to have been chosen by Audi as the venue for one of its 2019 Audi Quattro Cup Team qualifying tournaments. The 18-hole individual challenge took place on Atalaya’s championship Old Course on Saturday, the 4th of May.

The tournament was open to any Spanish federated amateur golfer and offered nine handicap categories and one “absolute” scratch division. The field of some 120 competitors quickly filled, with only 20 spaces reserved for Atalaya members.

Atalaya is very proud that members Maureen Carey and Marc Vermeiren were two of the 10 category winners on Saturday. Competition was fierce with such a seasoned field of players, and Maureen and Marc’s wins are a testament to the fine set of skills Atalaya members demonstrate on a regular basis.

Audi has divided the map of Spain into four territories – Northeast, Northwest, Central, and South – and is hosting three qualifying tournaments in each area. Each participant at each qualifier will be sectioned into one of nine handicap divisions or the scratch category. The winners from each of the 10 categories in each of the 12 qualifying tournaments will play in the Territorial Final at La Cañada Golf Course in Cádiz, on Saturday, the 28th of September.

At La Cañada the 10 winners from each of the three qualifying tournaments in each of the four zones of Spain will compete against one another. The 10 winners from each of Spain’s four territories will, then, form a team, and these four teams will compete against each other in the two-day National Final scheduled for later in the year. National Final winners will then move on to compete in the International Final.

We look forward to following Maureen and Marc as their journeys progress through the 2019 Audi Quattro Cup Team challenge, and we thank Audi for is renewed support of this popular competition and the inclusion of Atalaya in its venue choices.