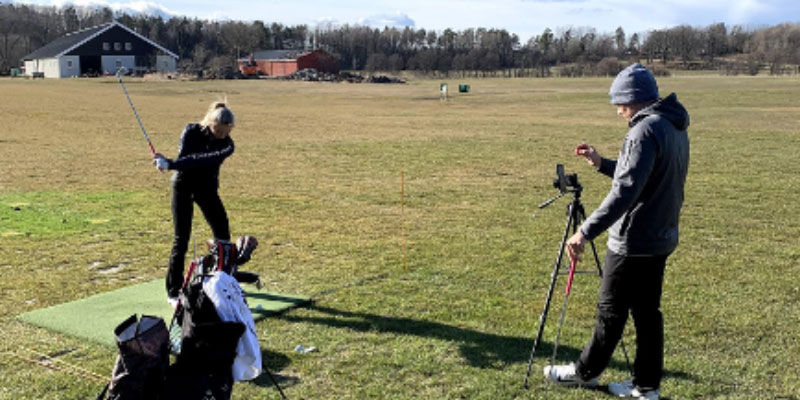 The plans of Tina Mazarino, the talented, young Norwegian professional, were abruptly squashed when the COVID-19 lockdown struck. Sponsored by Atalaya Golf & Country Club, Tina had planned to carry out her spring training regime at Atalaya.

On the 12th of March Tina flew to Málaga to start her training program at Atalaya. She was anxiously anticipating her first tournament in France on the 1st of April. But in the blink of an eye, everything changed. “On the same day Norway closed down and imposed travel restrictions on travelling to Spain. It was the message that met me when I landed in Málaga,” Tina said.

Things then happened very quickly. The Norwegian Olympic Committee “… told athletes to stay where they were and make their preparations for the coming season,” she said. However, two days later on the 14th of March the announcement was made that Spain was closing down. The lockdown included golf courses. So, Tina returned to her home outside of Oslo in Norway.

What did all of this mean for the aspiring young professional golfer? Tina’s questions abounded: “When will there be tournaments? When can I travel again? When can I go back to Spain and Atalaya? Is it okay with everyone I know at Atalaya? What do I do now?”

Unfortunately, Tina’s answers were few. Upon returning to Norway she was immediately quarantined for two weeks with nothing to do. However, for Tina’s father the answers were easy. “Dad always has the best advice,” she said. “The solution was to buy a 75 inch television and a PlayStation 4.” The family spent time watching TV, playing games and walking in the woods.

When the quarantine was over, Tina was able to practice at home and later travel to train with her technical coach. A plan for the season was formulated with the decision “to prepare as normal and just see what would happen,” said Tina.

Tina admits that situations like this can create a lack of motivation, but for her the circumstances proved to be a wakeup call. She was forced to dig deep and ask herself: “Is this the thing I really want to do?” Tina then goes on to reflect that the answer was very clear. She decided to seize the opportunity and “do the right things a little more often and a little better than the rest.” This formula is what is necessary to be great.

Her weekly schedule started on Sundays. Although she had no idea when her next tournament might be, she followed a strict training programme, determined to get better every day.

Tina also set aside time to work with the junior girls at Kjekstad Golfklubb, her home club. “One of my passions is to give something back to the sport I love and especially young girls,” she said. “I spent a couple of hours with them every Monday. It seemed to inspire them, and in a way it was inspiring to me, too.”

As time passed the corona virus threat improved in Norway. During the second week of April, the Norwegian government started to loosen restrictions. Most importantly, “we were able to start playing golf again, but with restrictions very similar to what you have in Spain,” she said.

Now that we in Andalucía are in Phase 3 of the de-escalation plan, Tina anxiously awaits returning to Atalaya. “I am so happy that things are starting to look bright all over Europe and of course for you all at Atalaya. I really miss walking the fantastic golf course and talking to you all. I’ll be back as soon as I’m allowed. Before you know it we’ll meet at the clubhouse again. In the meantime stay safe, stay healthy and take good care of yourselves and your loved ones.”

All of us at Atalaya look forward to greeting Tina upon her return and watching her fine tune her beautiful swing and tighten up her short game while practising and playing at our club.