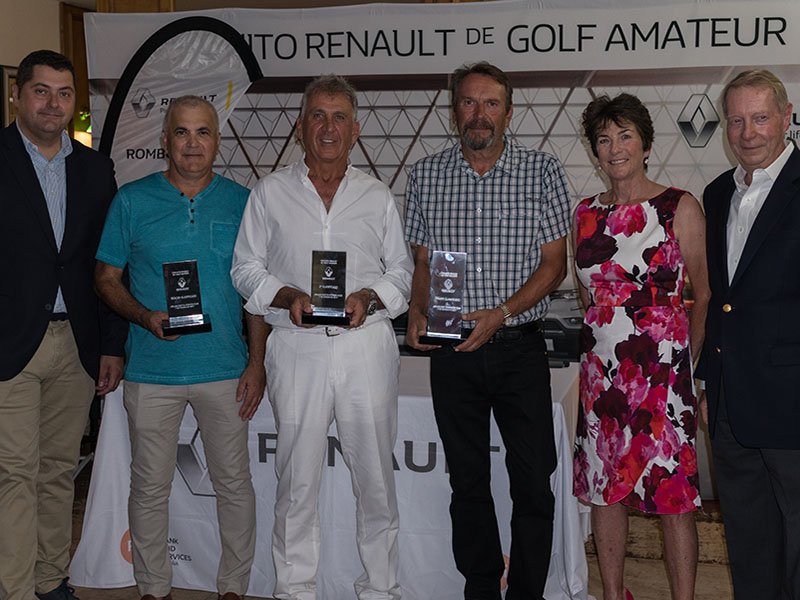 Atalaya is one of several top-rated Andalusian courses where the Circuit has hosted events in 2017. Before coming to Andalusia, the Circuit also made stopovers at courses in the Basque Country and in the communities of Murcia, Galicia, Navarre, Extremadura, Asturias, Canarias, and Madrid.

ROMBOSOL, Costa del Sol’s Renault dealer, with locations in Estepona, Marbella, and Fuengirola, wanted to host a very special leg of the Circuit at Atalaya, and, consequently, the decision was made to schedule Renault’s tournament to coincide with Atalaya’s Captains Day celebration. As a result of ROMBOSOL’S sponsorship, the tournament was advertised throughout the Costa and was quickly filled to capacity. The field for the 18-hole individual Stableford event was composed of Atalaya members, as well as guests from several nearby clubs.

Atalaya member Simon Wellstead brought home the tournament’s first place honours, delivering a spectacular card of 43 points. As the winner at Atalaya, Wellstead qualifies to play in this year Circuit finals which will be held at El Encin Golf Hotel in Madrid on November 25.

Second Place was captured by George Slawinski, who is also an Atalaya member, and Third Place was awarded to Juan Carlos Garcia. Both Slawinski and Garcia posted 41 points, and their tie was broken in favour of Slawinski who maintains the lower handicap.

As a special gesture to the tournament’s lady golfers, ROMBOSOL awarded a Cleveland golf bag to the tournament’s highest scoring female competitor. Atalaya’s own Julia Flada was the proud recipient of this very generous gift. Flada carded a score of 35 points.

ROMBOSOL, also, offered a Renault Captur to any tournament participant who made a “Hole in One” on the course’s Third Hole. The flag was placed a very challenging 170 meters away from the tee on this imposing Par 3. Unfortunately, no one succeeded at beating this challenge, and the car went unclaimed.

During the tournament, ROMBOSOL provided to all in attendance the latest news about the Renault brand, including information about the new Koleos that was recently chosen by specialised journalists as the “ideal car” for golfers.

After its stop at Atalaya, the Circuit will travel to Bilbao, Málaga, Cáceres, Madrid, and Alicante to host some 40 more tournaments before this year’s finals in November. In all, some ten thousand golfers throughout the whole of Spain will have participated in Renault’s 2017 amateur circuit competition, making this event the largest amateur golf tournament ever held to date in the history of Spain.

The Royal Spanish Golf Federation joins with Renault in this project with the goal of promoting golf values, including good health, sportsmanship, and social, economic, and environmental sustainability. All amateur golfers regardless of their age or handicap are welcome and encouraged to participate in the Circuit Renault de Golf Amateur.