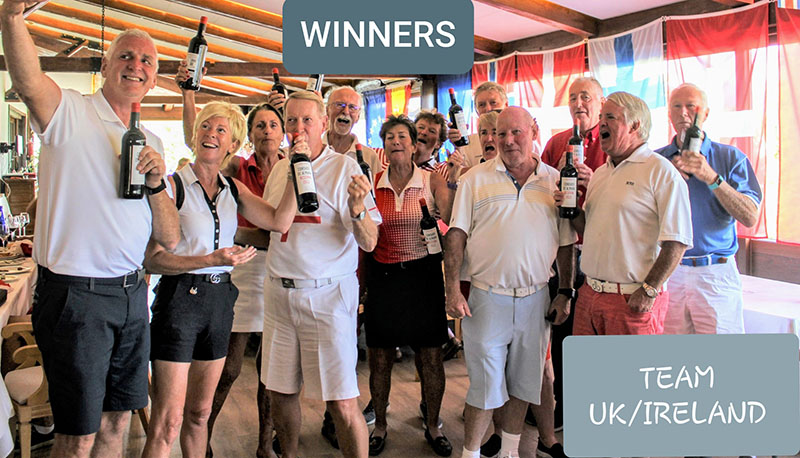 Upholding Atalaya Golf & Country Club’s motto – “Variety is the spice of life – 36 Nationalities, 36 holes” – nearly 100 members representing the majority of these 36 nationalities participated in Atalaya’s 2019 International Tournament. The 36-hole event was played on the Old Course on Saturday and Sunday, the 26th and 27th of October.

Members of each team represented their country of birth or country of citizenship. The mighty UN team served as a melting pot for all who did not qualify as members of the other six teams. UN team members represented Atalaya’s smaller nationality groups – Argentina, Belgium, Canada, Japan, Russia, Serbia, USA, and the like.

With each of the seven teams hoping to capture the tournament’s coveted trophy, named after Pat and Jack Odell who originally sponsored the event, Saturday’s format was “Four-Ball-Better Ball” and Sunday’s was “Greensomes Stableford”.

This year’s tournament stars were the pair of committee member Peter Hood and Louise Spruce, who carded scores of 46 and 45, respectively. Their amazing two-day run, mounting a total score of 91 points, assured their UK/Ireland team the tournament victory (314 points). This year’s Second Place honours went to team UN, with a highly respectable 302 points. The Fjords & Lakes gang snuck in dangerously close behind with 301 points to capture Third Place.

Honourable mention is extended to the Swedish pair of Gunilla Parmlid and Gunnar Ottosson who tied with Spruce and Hood at the top of the Day Two Leaderboard, scoring 45 points.

The International Tournament is just one of several tournaments set aside throughout the year exclusively for Atalaya members. For more information about the many benefits Atalaya Golf & Country Club membership affords contact: info@atalaya-golf.com.