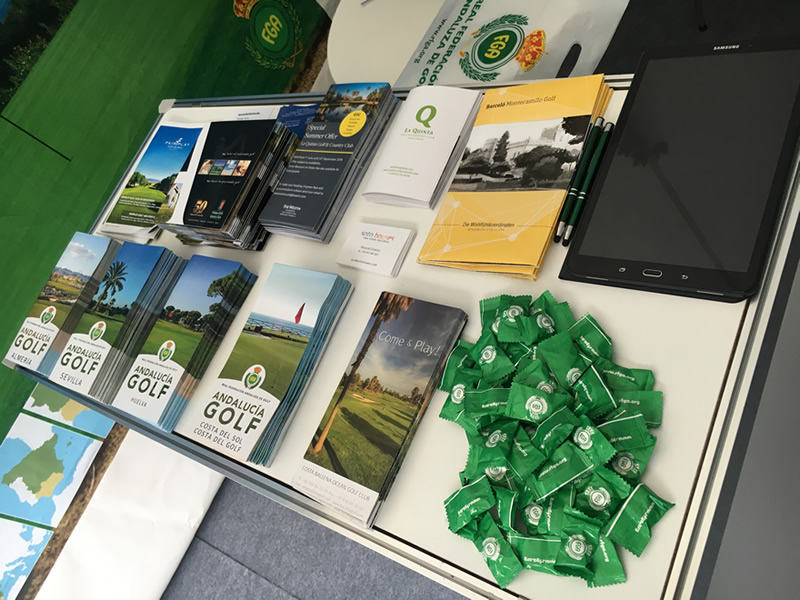 Atalaya Golf & Country Club’s General Manager Andrés Sánchez recently attended the BMW International Open in Cologne, Germany, June 21st – 24th. Sánchez was a member of a delegation from the Royal Andalusian Golf Federation (RFGA) that attended the tournament with the sole purpose of interacting closely with individuals from a market segment that year after year chooses Andalusia over other golfing destinations.

Atalaya Golf is part of the select group of Andalusian golf courses that regularly provide services to visitors from all over the world. The visit to the BMW Open provided Sánchez and his colleagues the opportunity to meet with potential customers who shared their interests, their opinions, and their concerns about Andalusia’s golf courses. This outside input helps all of Andalusia’s golf course managers to improve and create strategies that are adapted to the needs of this highly important market segment.

Sánchez commented that some of Atalaya’s own Club members attended the tournament and proudly wore garments commemorating the 50th Anniversary of Atalaya Golf & Country Club that will be celebrated in late October.

Sánchez also shared some of his personal observations about the event. He found it very difficult to predict who would be the tournament’s winner, with six players tied for the lead and another 16 within only two strokes. Obviously, anything could happen; however, in the end British player Matt Wallace emerged victorious. Matt carded a near flawless final round of 65 that included seven birdies. Throughout the tournament Matt’s performance was exceptional, with only four bogeys and one double bogey in 72 holes. He had ‘very few failures and very incisive golf’, reported Sánchez.

The BMW International Open 2018 championship title is the second title that Wallace has captured this season. About a month ago he also won the Italian Open.

The Danish golfer, Thorbjorn Olesen, was the tournament’s big surprise. Olesen vaulted up 40 positions in the competition with a spectacular final round of 61, that included an eagle and nine birdies, four of which were on the last four holes. He ended just one shot behind the leader and nearly forced a tiebreaker. ‘This would have been a magnificent prize for him’, said Sánchez.

As for the Spanish players, both Nacho Elvira, with a final round of 65, and Sergio García, with a 68, managed to reduce their numbers and finish higher on the leaderboard than after the first three days of play. Elvira signed his best card of the tournament, having played his first three rounds over 70. He ended tied for 9th Place. García also managed to bring in a final round score under 70 for the first time at the Golf Club Gut Laerchenhof and finished tied for 12th. Gonzalo Fernández Castaño and Jorge Campillo finished farther down the leaderboard tied for 33rd, with final rounds of 68 and 72, respectively.

Atalaya Golf & Country Club is very proud to have attended this prestigious German tournament and to have had the opportunity to meet and interact with so many of the 2018 BMW Open’s visitors. We are sharing some pictures of the event for those who have interest.