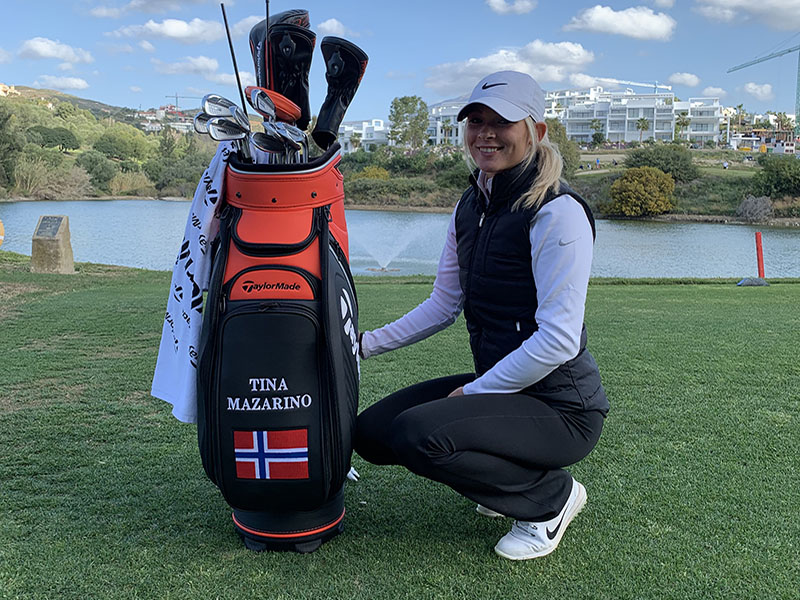 Now that I’m in the beginning of my second season as a professional golfer, I think about what a wise man said to me a while back:  “If you want to get good at golf – it’s important to learn how to lose”. Although losing doesn’t always mean playing bad golf. The path of success often has big bumps and rarely goes straight to heaven. At this moment my slightly older colleague from Norway just won the PGA Tour in the Puerto Rico Open at -18 this is the greatest norwegian golf achievement ever and is an inspiration to us others. Viktor Hovland is one who has really made it. Apparently he hasn’t met the big bumps yet, but I don`t know.  Me, on the other hand, have met some, through illness and injury. Yesterday there was a lady who asked me “you don’t give up then”. Think it was my caddy and dad who answered. No, as long as it’s fun we won’t quit.

After a couple of good tournaments on LET Access and the Swedish Golf Tour the 2019 season became suddenly shortened by illness.  Followed by  6 months of recovery training it felt like starting all over. Now my health and body seems well and it is the time to get ready for the 2020 season!

With a little help from my friends!

Some people think I am totally crazy about investing in a professional golf career and there are probably many reasons not to choose this career. For me it has been a dream since the age of 10  when I got my first hole in one. I have never lost sight of my goal. This is what I am good at and my number one reason why I get up in the morning.

In Norway where I come from we have a summer season that lasts from May to end of September/October. Where I live there is often a meter of snow and minus degrees most of the winter. Being on grass during the cold season is a challenge for us golfers. I’m too young to travel alone and are not allowed to even rent a car. My kind dad is the one who drops everything and follows me all over Europe. His work he mostly do at nights so that he can be on course with me during the day.  It’s a good thing he has that kind of a job that he can bring with him everywhere.

The partnership I have had with Atalaya Golf Club and Andrés Sánchez is a huge deal for me! Having a place like this where people know you, where you can play and practice  as much as you want – is what matters most to a golfer struggling upwards. I feel privileged.  When I get on the course at sunrise and I hear from the guys in the Proshop; “ Hola Tina” gives me the best start of the day and when I leave they say: “adios Tina” – it’s so nice!

The first time I visited Atalaya was at a big amateur tournament  in 2017, I think I became #7. And I will never forget a terrible triple on hole 18. But I fell in love with the place. I played some practice rounds and met many nice people, and even though I am young I felt this nice atmosphere around the club.

Atalaya Old Course and New Course are two very different courses, but both have distinctive features that are worth experiencing. Old Course is a championship course and can be played quite long. There are no similar holes so you never get bored even if you play every day. New Course is more idyllic with views and is beautifully situated. It is shorter, goes up and down a bit, but I really enjoy it. My record in a friendly game there is -6. Maybe that’s why I love it.

As a professional, being able to practice all kinds of strokes is important. I get to do that at Atalaya and the training areas are in very good condition. The greens here must be one of the very best. They are fast, smooth and very good to play and practice on.

I feel as much  at home here at Atalaya as I do at my home club; Kjekstad. Luckily I have many friends and people cheering on me there too.

It helps to be patient if you want to succeed in golf. There is a lot of work with small details. Hour after hour, day in and day out,  you work hard to make small changes. Improving putting with two strokes in one round can mean a thousand hours spent on practicing.

On a regular weekday, we get up at 6am and are on the course just before 8am to play 9 or 18 holes. After that we go directly to the practice area for 2 – 3 hours. Then lunch is a good hour and a half. After lunch it is back to the practice area for an afternoon session. In the afternoon, there is usually either alternative practice such as physical or mental exercise or physical therapy, or something else to prepare for tournaments. I have one day off a week.

In tournaments that go over 3 or 4 days you really get tested for 3 strokes during these days can be the difference between success and failure. This is one of the things that makes the sport one of the really big with 60 million athletes. We strive for the perfect everyday.

We do this because the success in this sport is great, the feeling and the upside is greater than in most other sports I think. Sometimes we get the taste of it. Like I did when I won the Norwegian Championship in match in 2016. I remember well my second place in the US KIDS Golf European Champions Chip as a 12 year old and my taste for victory was  probably born there and then. I have been selected by the Norwegian Golf Federation in many contexts since I was 13 years old and it’s always a special feeling to play with the national colours on the t-shirt.

Finally, thank you to everyone who supports me and especially all the ladies at Atalaya who make me feel more than welcome.

Editor’s Note: This post is published without edit as submitted by Tina Mazarino.