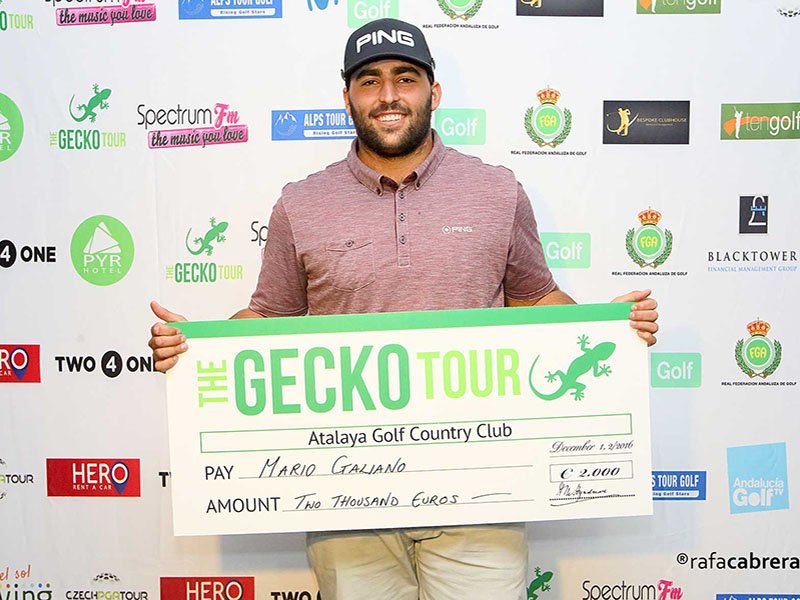 Mario Galiano took home the win in the sixth tournament of the Gecko Tour.

The Andalusian golfer won on the Atalaya Golf Club course, in Benahavís, with quite the show. His total score was 130 shots in two rounds, and shot a majestic 64 in the final round./p>

Victoria was left without options with none other than a five-shot advantage with respect to those in second place, Gonzalo Gancedo and Jamie Dick. Swedish golfer Victor Roupe and Canadian golfer Michael Dart finished in fourth place and Sam Connor, winner at the Parador earlier this week, the golfer from Málaga Noemí Jiménez and English golfer Ben Robinson came in sixth.

It’s Mario Galiano’s first win as a professional. The golfer born and raised in La Cañada went pro a little over two months ago, before playing in the first part of the European Qualifying School and after a sensational career as an amateur, with multiple national and international wins. He made it to Number 3 in the world rankings.

Thus, Mario has entered the winning circle as a professional with a grand victory which, most of all, shows that all the hard work these past months has paid off. “Apart from from the win, which is always amazing, what I took home with me was how comfortable I was, I was myself on the course and I know that playing like that, I’m able to bring out the best in my game” he assures.

Galiano built up his win over the last nine spectacular holes. He had a partial score of six under par, with a birdie and an eagle on the last three holes. “The birdie on the 16th hole came after hitting a great shot off the tee (long par 3 around 200 meters) and landing a putt from six meters away. I made the eagle after a chip from fifteen meters away. As soon as I touched the ball I started laughing because I knew it was good”, he remarks. Be that as it may, the key to success was the drive. “In the past months I was hitting a fade, slicing the ball quite a bit, as if it were insecurity, and now I’m hitting the ball high and going for the draw. I feel like I have more freedom when I play and I feel like more of myself on the course”, he says satisfied.

Gaiano already won last year in the Gecko on this same course, although he was still an amateur golfer. This win is a spectacular way to start a new chapter in which the young golfer born and raised in San Martín del Tesorillo shows his true talented colors. The next goal is to get the Alps Tour card through the Qualifying School. His plan for next year is to alternate the Gecko with the Alps and the Challenge Tour.

Text and image from The Gecko Tour