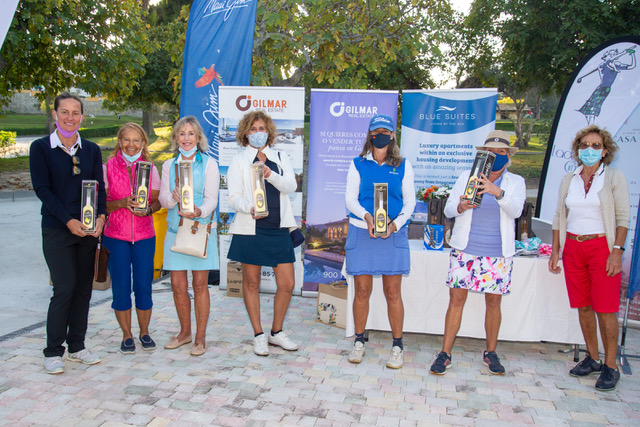 Atalaya Golf & Country Club was the scene of Ladies in Golf & COPE Marbella’s third tournament of the season on Sunday, the 1st of November. The competition offered three categories for women and one for men.

Nearly 40 golfers competed in the 18-hole, individual Stableford event on the Old Course. In the effort to avoid crowds, the originally planned shotgun start was changed to consecutive tee times starting from 10h00.

Participants teed off on Hole One in perfect weather conditions under blue skies and calm winds. The course’s fast greens and difficult pin positions made play especially demanding. The stark reality was that birdies and pars often turned into bogeys or worse.

At the turn Casa Pablo of Marbella offered a delicious albariño from Galacia (https://casapablo.es/), and Goyo Marbella provided scrumptious canapés (http://goyomarbella.com/). Fruit juices and energy bars were also available to give players a little extra strength for the next nine holes.

The highlight of the day was the “Beat the Pro” challenge that was held on the par three Hole 16. Future professional Valentina Albertazzi, who has been sponsored by Atalaya Golf for many years and who was named the Division II, 2019-2020 “Rookie of the Year” by the Women’s Golf Coaches Association, was ready and waiting as players arrived on the tee box.

For a contribution of five euros, golfers could attempt to drive their balls closer to the pin than Valentina drove her ball. Any participant who won the challenge was awarded a pizza and drink from Pizzeria Don Giovanni in Cancelada (https://pizzadg.com/).

At the end of the day €150.00 was raised for Caritas Marbella to help those in need, “especially the poorest and most excluded” (https://www.caritas.es/).

Awards Ceremony and Tombola – Perfect Conclusions to a Great Day

The awards ceremony was the perfect conclusion to a most enjoyable day. Maui Jim, official eyewear sponsor of the European Tour, provided sunglasses with polarized lenses to the first place winners in each of the tournament’s four categories. Gilmar Real Estate of Marbella gave two magnums of wine to the men’s runner-up. Roche Bobois awarded cushions and Murano glass vases to the runners-up in the three ladies’ divisions. Third Place winners went home with boxes of balls and 3D Bobby Bear sculptures from Grupo Artenovum.

The players who were “closest to the pin” received magnum bottles of wine from Casa Pablo.

And finally topping off everything was the event’s generous tombola. Smiles quickly emerged on the faces of all participants who had not previously received a prize. Gifts included bottles of limoncello, greenfees, umbrellas, golf kits from PG Golf & Sports Academy at Atalaya, and beauty treatments from Angelo Villaba Estilista.