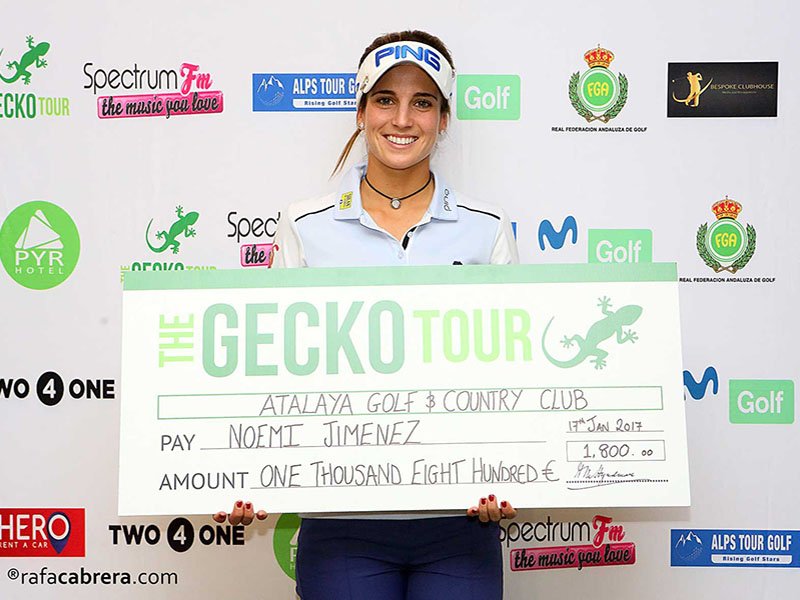 Rising Marbella star Noemí Jiménez had produced some excellent results in her 2016 appearances on The Gecko Tour and it seemed only a matter of time before she would break through for her first victory. That moment came in the third event of 2017, and 11th of the 2016-17 season, at Atalaya Golf & Country Club.

Twenty-three-old Jiménez thus became the first women in the six-year history of the tour to lift a champion’s trophy, but not before some anxious moments at the end of the two-day tournament. There was a four-way tie at the top of the leaderboard after regulation play, Noemí being joined by Englishmen Sam Connor and Steven Jones and another Costa del Sol-born star of the future, Mario Galiano, who had won the Gecko event played at Atalaya in December.

The latter two two dropped out after the first play-off hole, and Jiménez sealed another birdie on the second extra hole to take the title.

Understandably delighted with her victory, after a rookie year on the Ladies European Tour when she finished 87th on the order of merit, with two top-10 finishes, she now heads to Australia for the first event of the new LET season in February, before returning to Spain and attempting to add to her Gecko tally.

In the image you can see to left of Noemi Jimenez to Verena Thost, daughter of Atalaya Old Course designer, and to the right to Andrés Sánchez, Manager of Atalaya Golf.