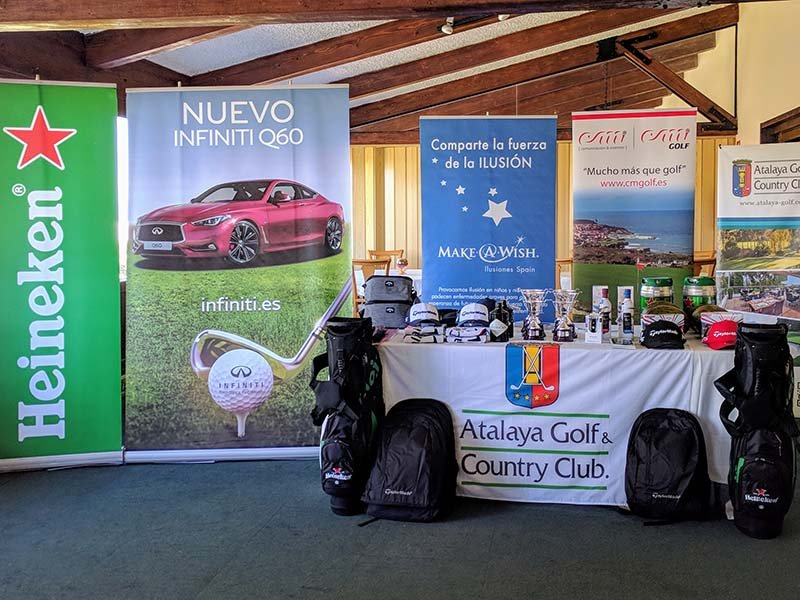 An important installment of the Heineken Circuito Infiniti Costa del Sol was played at Atalaya Golf & Country Club on Saturday, October 21st. Both Atalaya members and guests were treated by Heineken and Infiniti to a fun filled and challenging day.

The 18-hole Pairs Better Ball tournament, calculated by the better individual Stableford score of each pair member, started early with a nine o’clock shotgun start on the Old Course. The competition proved to be intense, with only a single category of prizes to be awarded.

During play, tournament participants were greeted at the back of the ninth green by representatives of the tournament’s sponsors who offered most welcomed tapas, as well as a selection of Heineken beers, including the brand’s new 0.0% alcohol lager.

After play, all gathered at Atalaya’s clubhouse and were treated to a never ending array of delicious tapas and drinks. Conversation flowed with remembrances of the great shots of the day, not to mention the laughs that were shared over shots that probably are better forgotten. Then, the moment arrived for the day’s winners to be announced.

Additionally, trophies were awarded in the tournament’s Scratch category to the pair who carded the competition’s lowest gross score. Winners were David Chacon Quirós and Antonio Flores Simon. Chacon, also, won the Closest to the Pin prize, and Doris Muller walked away with the honours for the Longest Drive.

A special award of a melon was presented to each member of the two teams that carded the lowest number of Stableford points of the day. Melon winners were the teams of Liselotte and Klaus Weinem and Alma Wenger and Ludwig Koller.

Wanting to include more than just those who had been recognised for their play during the tournament, the event’s sponsors conducted a tombola for all of those who had not already won something. Many prizes were raffled, the majority of which were golf related and, maybe, the most exciting was the free use for a weekend of a new Infiniti Q30.

La Reserva Club Sotogrande, Doña Julia Golf Club, Aloha Golf Club, Baviera Golf, and Parador Málaga Golf join Atalaya as participants in this year’s Heineken Circuito Infiniti Costa del Sol. The first and second place winning pairs from each leg of the circuit qualify to play in the national finals, the date of which has not yet been announced.