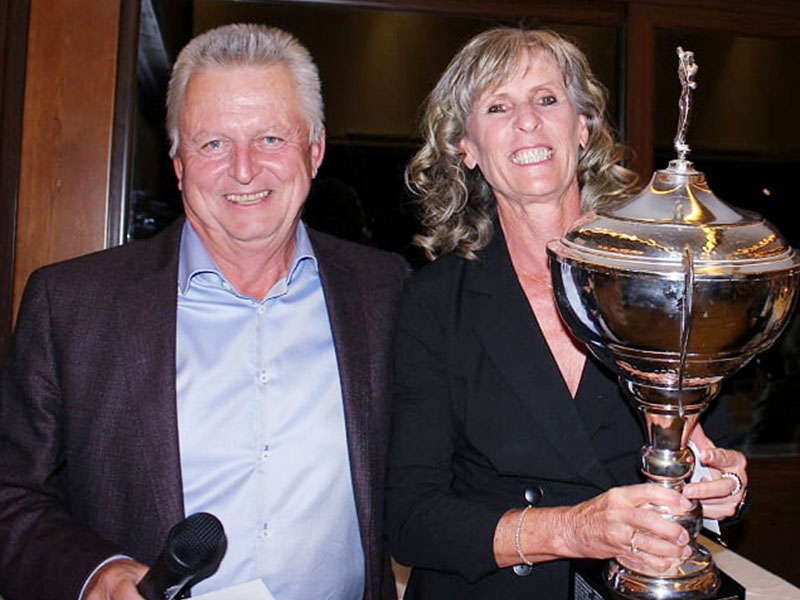 Atalaya Golf & Country Club’s outgoing President Michael Pollak celebrated his final President’s Day extravaganza in style on Saturday, the 9th of November. After a three-year term of office, Pollak will pass his title to the incumbent president in April of 2020.

President’s Day at Atalaya is traditionally a members’ event and ranks at the top of the list of the club’s most important functions. Each year a full day of activities is planned that always starts with an 18-hole qualifying Individual Stableford competition on the Old Course. Members strive to accumulate the highest number of Stableford points possible. The goal of every participant is to do the necessary to win the coveted President’s Cup trophy. The entire field, regardless of handicap or division in which a person competes, is eligible to win this sought after trophy. The only criterion is to score more Stableford points than anyone else.

This year Doris Müller took the challenge very seriously and played a nearly flawless round. Playing off of an exact handicap of 10.1, Doris had little room for error. Bogeys were out of the question, and on eight holes a par only yielded two points. The maths says it all. Doris played an outstanding round, assuring her the tournament win.

A great deal of personal planning on the part of both President Michael and his wife Evelyn went in to making the day perfect for all, setting the bar high for the next president. The couple chose golf caps inscribed “President’s Day” to give to all participants as a special souvenir. This gift was only the beginning. Evelyn served her own home-made goulash, with cheese, bread and drinks to all at the turn, and then before the round was over, all players were offered one more treat – a glass of cava.

Golf was only the beginning of a very festive day. After a short break and time for a nap, golfers and their significant others returned to the club for an evening of reflection on the highlights of the day, as well as dinner and dancing and, of course, the awarding of prizes to all of the tournament’s top scorers.

This year competitors were categorised into three divisions, with two for the men and one for the ladies. In Men’s Division I (handicap 0 – 16.1), Jorge Vanni captured First Place with 39 points, and Andoni Basterrechea took Second Place with 36 points. Cachy Siconolfi was Third with 35 points. In Men’s Division II (handicap 16.2 +), Raul Rodriguez was First with 35 points and Paul Wiget was Second with 33 points. Also with 33 points Karl-Johan Raaegaard placed Third, as a result of his higher handicap. For the ladies, Martine Arnold scored 37 points to place Second and Eileen Audas was close behind in Third with 36 points.

But in the end no one’s performance came close to that of Doris Müller. She very deservingly will have her name inscribed on the President’s Cup as the 2019 tournament champion, becoming a tangible part of Atalaya’s history.