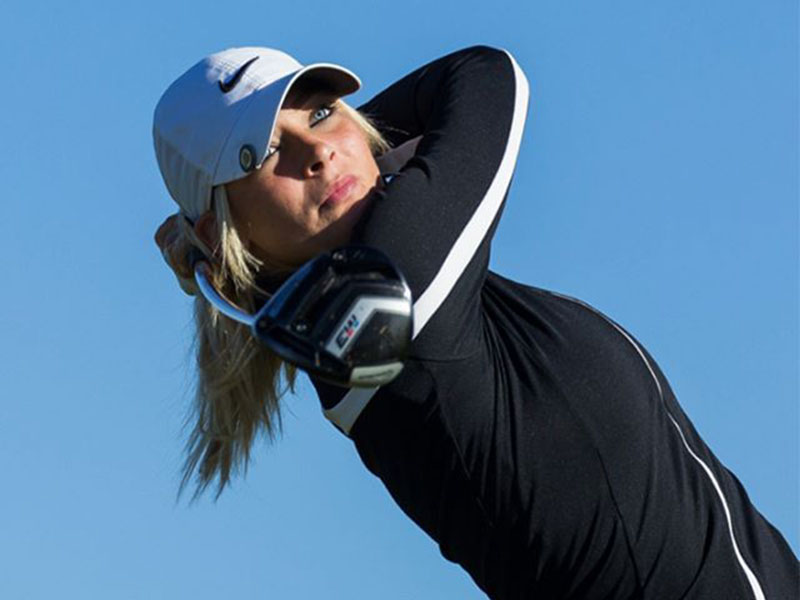 For the next five weeks Norway’s Tina Mazarino will be spending her days, and maybe even some of her evenings, using Atalaya’s practice facilities and playing on both of the Club’s two championship courses. Tina comes to Atalaya from Kjekstad Golfklubb, located outside of Oslo and plays off of a +1.2 handicap.

The eighteen-year-old, who was Norway’s top ranked lady amateur, recently turned pro. She has practised on numerous Costa del Sol courses during the last several years and became acquainted with Atalaya whilst playing a tournament here just a little over a year ago. “The courses, people and the environment,” said Tina, “ gave me an incredibly positive experience!”

According to Tina, when she learned that she was going to be able to return to the Costa to prepare for this year’s professional season, it was her “big wish” to train at Atalaya. Her dream was to make Atalaya her pre-season practice home. Tina said of Atalaya that it “… is exactly the kind of course a professional player needs for pre-season activities. A lot of bunkers, good fairways and very good greens.”

Perhaps you have already caught a glimpse of Tina practising or playing on one of our courses. She is often out early in the mornings for a quick nine holes with her caddie, who just happens to be her dad, Per, a seasoned golfer in his own right.

Although she has only been at Atalaya for a week, Tina is already becoming acquainted with many people. She is spending time with the promising, lady amateur, Italian Valentina Albertazzi, who is also sponsored by Atalaya. As Tina has only played in the past with Valentina during tournaments, she is now enjoying the opportunity to get to know Valentina better whilst they both practice at Atalaya.

In addition to Valentina, Tina is enjoying her interaction with Diego Morito, co-founder of the Enjoy Golf Academy. Diego “…is responsible for the training area and is a very nice and skilled pro, who can help everyone,” said Tina. Also, Tina is meeting many of Atalaya’s members and finding Ladies’ Captain Kajsa Schmidt especially friendly. Tina also commented that the people in the pro shop and the maintenance crew are always “helpful and pleasant”.

Recapping her first week, Tina remarks that things have been hectic. She has been training seven to eight hours each day. “The day starts when the sun rises,” she said. In these early morning hours she plays either nine or 18 holes. Next, she stops for breakfast, after which she takes a brief rest. Short game practice and putting follow. Then, it is time for an early dinner and one more little rest before a second short game practice session, another nine holes or perhaps a physical workout session. “There are many parts of the game to be worked on, and it takes many hours of practice. But five weeks here will hopefully get me ready in time for the season,” said Tina.

All of us welcome Tina to our Atalaya with open arms. We wish her the very best and are delighted that she has chosen Atalaya for her pre-season training program. Tina sums up her feelings about the time she is spending at Atalaya very well: “I am very happy to be here for the next five weeks. It will give me the best preparation for the season.”