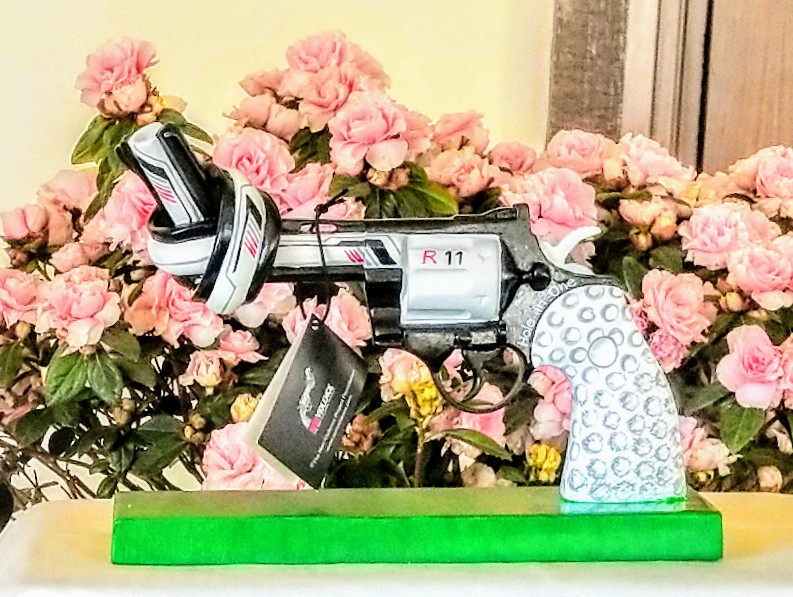 Throughout the year numerous tournaments are organised just for Atalaya Golf & Country Club members. These highly popular competitions serve not only as occasions for participants to demonstrate their best golfing skills but also as opportunities for members to become better acquainted and build lasting friendships.

Sometimes these events are charity tournaments, and one of such was played on Atalaya’s championship Old Course, on Saturday, the 10th of April.

Known as the Non-Violence Trophy, all funds raised are being donated to the Non-Violence Project Foundation. The non-profit organisation’s mission is: “to inspire, motivate and engage young people to learn how to solve conflicts peacefully.”

Participants on Saturday competed for a replica of the famous knotted gun sculpture created by the internationally recognised Swedish artist Carl Fredrik Rueterswärd. Known as “Non-Violence”, Rueterswärd’s creation serves as a tribute to John Lennon after his senseless murder in December of 1980 and as a protest against violence.

Rueterswärd’s original, bronze sculpture, commissioned by Lennon’s partner Yoko Ono, was placed outside the United Nations complex in New York City in 1988. Symbolising a Colt Python 357 Magnum revolver, the barrel of the gun is knotted and points upwards. The symbolism is powerful. A violent object is moulded into a symbol of peace and non-violence.

Today more than 30 sites worldwide, including the Olympic museum in Lausanne, Switzerland, the Waterfront in Cape Town, South Africa and Peace Park in Beijing, China, display copies of the sculpture as symbols of peace and non-violence.

The tournament’s trophy, a 19 cm replica of Rueterswärd iconic sculpture, has special meaning for Atalaya’s golfers. It was painted by American, professional golfer Dustin Johnson. In 2020 Johnson won the Masters, one of the four men’s major championship tournaments. Unfortunately, he did not make the cut in 2021.

Johnson is one of several well-known celebrities who have crafted their own personal versions of the original knotted gun. All of this is to educate the public about the necessity to use non-violence to bring social change and peace.

Jan Hellman, co-founder of the Non-Violence Project Foundation, comments: “The knotted gun carries a message that is at the same time powerful and easy for most people to understand. It makes people think about the impact of violence and non-violence.”

Atalaya members are privileged to be a part of and contribute to the success of this very worthwhile project that promotes peace and non-violence worldwide.