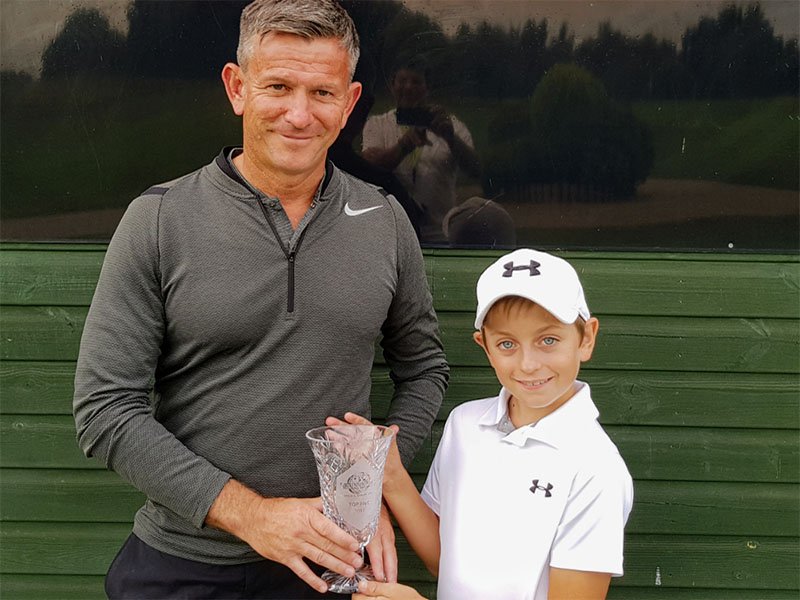 Aspiring junior golfer Jake Valentine spends several months of each year training on the Costa del Sol, and in October of 2016 Atalaya’s Director General Andrés Sánchez offered British born Jake a sponsorship at Atalaya Golf & Country Club. For a little more than a year Atalaya has provided Jake with the complimentary use of Atalaya’s practice facilities and the opportunity to play in the afternoons on the New Course. Additionally, the Club supplies Jake with golf lessons from Azahara Muñoz’s former coach Fernando Vega Cabeza and golf shirts and accessories showcasing the Atalaya logo.

According to Sánchez, “Atalaya was very happy to sponsor Jake since we were Azahara Muñoz’s training club for over 13 years and now have another junior using our club with the goal of becoming a very good professional golfer.” Currently, Muñoz ranks 72nd in the Women’s World Golf Rankings.

Only a little over a year into his training at Atalaya, Jake is already proving himself worthy of the confidence Atalaya has placed in him. Last August Jake finished Third in his age group at the US Kids World Championship held at Pine Hurst, North Carolina. This event is the most prestigious junior tournament in the world for players under the age of 14, with some 1,200 junior golfers participating.

“In my age group of nine-year-olds, there were 152 kids from more than 50 different countries. On the final day I shot a 4 under 68 on the Pinehurst #1 course, which was the best score of the day,” said Jake.

Then he continues, “I spend most of my time at Atalaya not on the two amazing courses but in the short game area and especially on the practice hole. I would not have been able to do as well as I have this year without access to such wonderful facilities.”

In addition to his Third Place finish in the US Kids World Championship, Jake finished Third in his age category in the US Kids European Championship and Second in the British Kids Championship. He, also, won the Net Division of the Sotogrande International Young Talents Trophy.