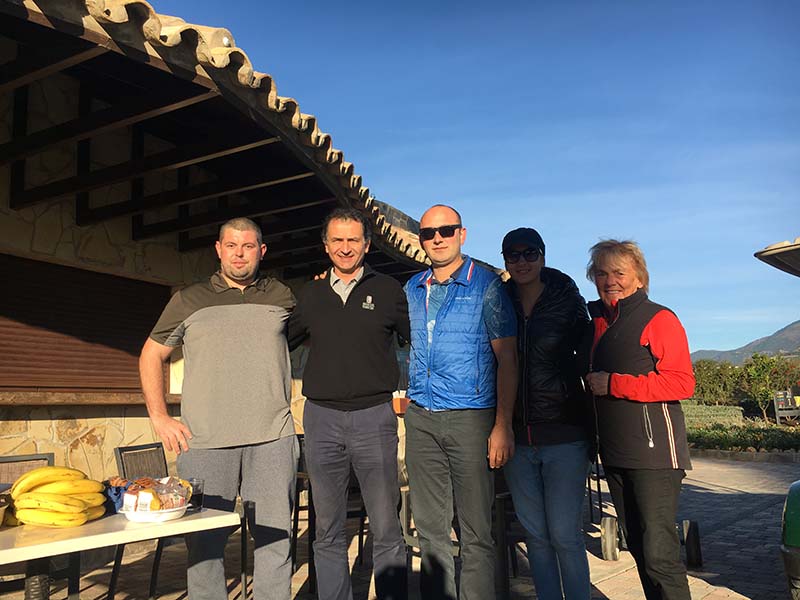 Each year during the Christmas holiday season, Atalaya Golf & Country Club recognises the dedicated contributions its staff makes to the success of the Club throughout the year. This year, several special events were planned for Atalaya’s employees from the 22nd of December through the 7th of January.

As a surprise all of Atalaya’s workers were recognised by Atalaya Golf & Country Club Internacional S. A., the Club’s owner, with a unique gift basket in commemoration of the celebration of Atalaya’s 50th Anniversary held during 2018.

On the 22nd of December, Atalaya’s two courses were closed to both the members and the public to provide Atalaya’s staff with a celebratory “day off”.

In the morning a golf competition was organised for all employees, with breakfast, coffee and drinks offered by the club’s members as a unexpected treat to all of the tournament’s participants.

The 18-hole competition was held on the Old Course, and a Texas Scramble format was used. The goal was to provide an opportunity for success to those employees who are just learning to play the game. The idea worked, and the team of Rafael Garzón and José Luís Sánchez, both beginners, carded the best Net result of the day with a three under par. The event proved most enjoyable as an outgrowth of the mix of spirited competition, good food and drink and the usual, warm camaraderie that exists amongst Atalaya’s staff.

After the competition the annual “staff lunch” was held at the La Taberna de Miguel restaurant in Estepona. The festive menu consisted of different starters (jamón ibérico, croquettes, clams, prawns and the like). Several main course choices followed, including suckling pig, steak, lamb, sea bass, sea bream and sole. Dessert was an assortment of cakes and pies, and, of course, the wines and soft drinks flowed. A glass of cava to toast the New Year topped off the lunchtime festivities.

Golfriends kindly sponsored both the prizes for the tournament’s winners and the sorteo that took place after the meal.

Then on Monday afternoon the 7th of January, the year’s employees holiday celebration culminated with the bringing of gifts to the staff’s children by the Three Kings (the Three Wise Men). The generous snack, prepared in Atalaya’s kitchen, helped to create a warm and intimate atmosphere amongst both Atalaya’s employees and their families. The Three Kings is a revived, long-time tradition at Atalaya. Although it has been neglected over the last few years, the intent is to continue this fun celebration that welcomes both the staff and their families for many years to come.

The Atalaya Golf & Country Club Internacional S. A. team extends a warm thank you to Atalaya member Mr. Martin Wegmann, Mr. Antonio Valle of Golfriends and all of the club members who, through their generous contributions, have made these important events that honour Atalaya’s staff a reality. Without the invaluable support of everyone, none of this would have been possible.

MANY THANKS TO ALL AND OUR VERY BEST WISHES FOR THE NEW YEAR!