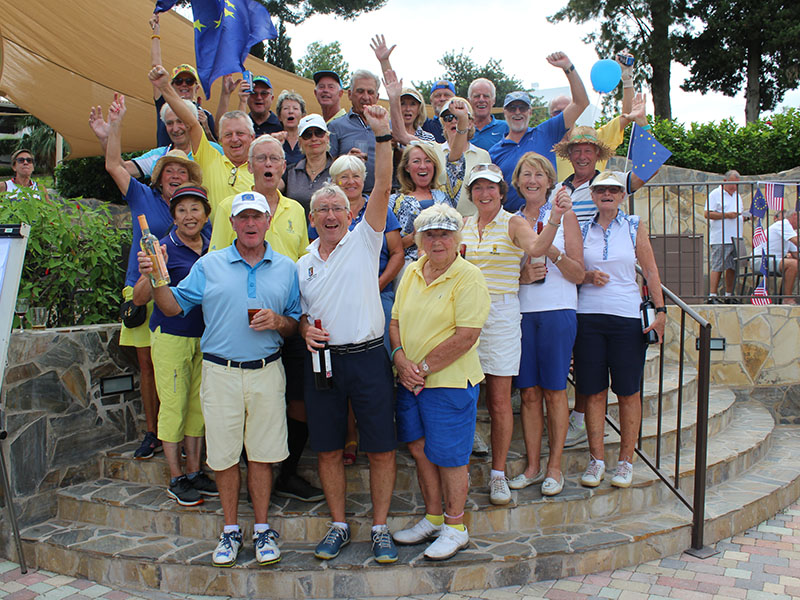 Patterned after the real event, members of Atalaya Golf & Country Club celebrated their very own version of the 2019 Solheim Cup on Friday, Saturday and Sunday, the 20th, 21st, and 22nd of September.

The kick-off for three day contest was held on Thursday evening, September 19th. European Team Captain Eija Rintala and USA Team Captain Camilla Frykman alternately announced one-by-one the names of each member of their respective teams. Outbursts of cheers and applause followed as each person was welcomed to Team Europe or Team USA. The roars and ovations continued throughout the spirited team building dinner that followed at the club’s newly remodeled Ventanas de Atalaya restaurant.

Solheim Atalaya parallels the format of the official event with “foursomes” on Day One, “four-ball-better-ball” on Day Two and “singles matches” on Day Three. The only deviation from the real thing is that Atalaya’s field of competitors is composed of not only women but also men.

Played on Atalaya’s championship Old Course, Team Europe ended Day One at the top of the leader board, and Team USA fought back hard to win the Day Two “four-ball-better-ball” challenge. With accumulated points very close, everything rested on Sunday’s “singles matches”. In the end Team Europe came up on top and was crowned Atalaya’s 2019 Solheim Cup Champion.