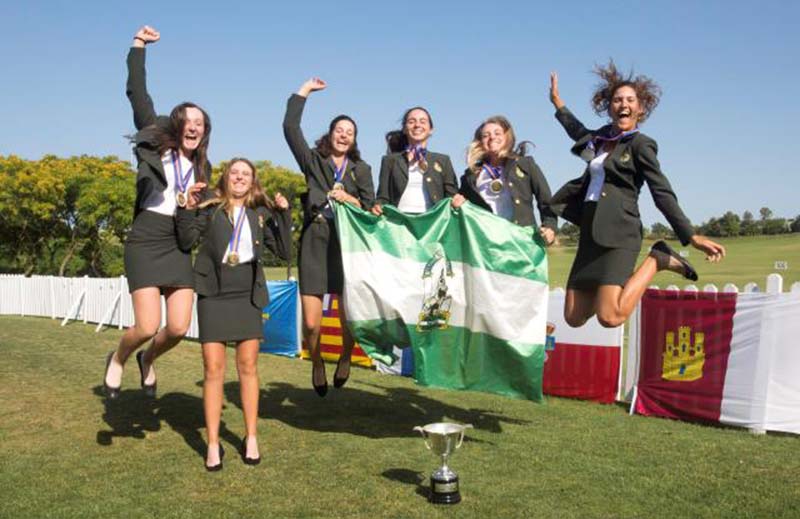 Andalusia’s home team of young, lady golfers are the 2018 winners of the Absolute Women’s Interautonomic. Thanks to the sponsorship that Atalaya Golf & Country Club has provided to aspiring, young golfer Valentina Albertazzi, Valentina was able to play a very important role in helping the Andalusian ladies to make this year’s first place victory a reality.

It has been fourteen years since the Andalusia team has captured the championship in this very important tournament. Both Andalusia and Costa del Sol are extremely honoured by this year’s tournament win.

The 2018 competition final was held from the 17th – the 21st of June at Sherry Golf in Jerez de la Fontera, Cádiz.

The win for the Andalusian ladies was not surprising, as the team consistently ranked at the top during this year’s qualifying matches. Laura María Gomez, the top scorer for Andalusia in the first two days of the tournament, was strongly supported by Atalaya’s own Valentina and Marina Escobar, who on day two shot a 71 and a 72, respectively. The strong Catalan and Basque teams simply could not keep up with the skilful play of the Andalusians during the three-day event.

The Absolute Women’s Interautonomic is composed of 16 teams from each of the autonomous golf federations in Spain. Six players compete on each team. The tournament’s format is divided into two phases: Phase One – Stroke Play; and Phase Two – Match Play.

Congratulations to all of the ambitious, Spanish lady golfers who participated in this year’s tournament. For more information about the Absolute Women’s Interautonomic and complete 2018 tournament results go to: http://www.rfegolf.es