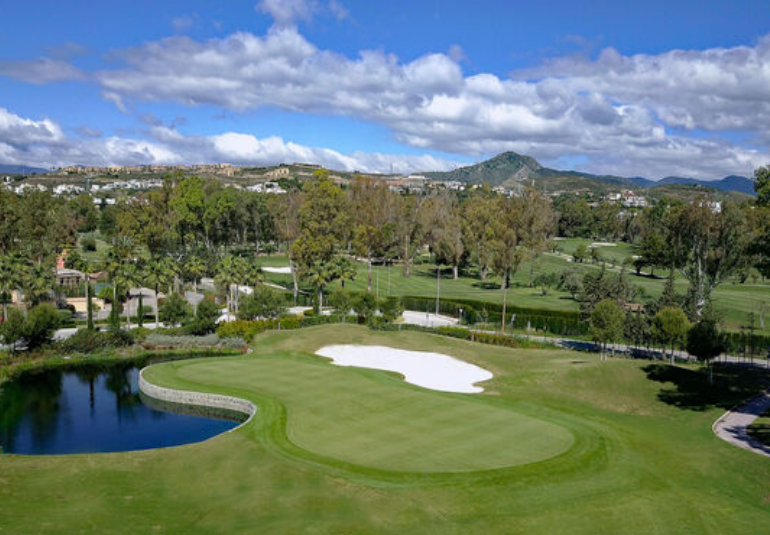 Here is the full story:

“Acosol, the public company responsible for the management of water resources on Costa del Sol, is currently irrigating more than 45 golf courses with reclaimed water. This is a measure that allows companies dedicated to this sport in the region to guarantee maintenance in the coming months despite the drought.

The declaration of drought decreed last Friday, 11th March, by the Andalusian Regional Government on Costa del Sol does not affect the golf courses in the region, according to the president of the Royal Andalusian Golf Federation, Pablo Mansilla. The regional document includes the prohibition of irrigation with “water resources suitable for human consumption”, something that golf courses haven’t done for years, he said.

He pointed out that, for irrigation, golf courses use “regenerated water, wells or are supplied by a community of irrigators”, although he called for “more inspections and vigilance” to ensure compliance with the decreed measures.

The president of the Royal Federation pointed out that on the Costa del Sol “most of the golf courses irrigate with reclaimed water from Acosol”, which is why he emphasized that “At first instance we are not being affected by the drought”, but there is “an alert because even this reclaimed water can be restricted, so we are very concerned”. As he pointed out, the region concentrates the largest number of golf courses in Europe, including Sotogrande, adding 73 and 1,314 holes.

He also pointed out that golf courses are “living beings” that “die if they are not watered, so “recovering them would be very expensive”. He highlighted that companies in the sector have spent years “researching and investing in technology to make irrigation as efficient as possible”. He also pointed out that “public administrations should commit to increasing the number of reclaimed water channels so that 100 percent of golf courses are connected to this resource”.

Mansilla has urged public entities to take “special consideration” with golf courses if the drought situation continues and “measures are toughened”, a request he has made based on the relevance of golf tourism both on the Costa del Sol and in the Andalusian community in terms of generating “wealth”.

He recalled that the golf segment generates “direct income of 2,200 million euros in Andalusia and 55,000 direct and indirect jobs”, of which “95% are full-time and permanent”. In addition, this tourism, whose high season is between “February – June and October – November”, moves around “650,000 tourists a year” on the Costa del Sol and contributes to lower the seasonality in the tourisim industry.

For his part, the CEO of Acosol, Carlos Cañavate, emphasized that the public company currently irrigates “more than 45 golf courses” on the Costa del Sol with reclaimed water, a reuse that involves the application of measures that contribute to “environmental conservation and a saving for the reserves of the La Concepción and aquifers”.

Cañavate pointed out that last year Acosol supplied “5.7 cubic hectometres of reclaimed water”, a service it began to provide in 1992, and explained that this water – treated by the wastewater treatment plants – “should be considered as a resource and not as waste”, which is why he remarked that its treatment allows “high quality reclaimed water to be used for other purposes, with special emphasis on the irrigation of large green areas such as golf courses and gardens”.

The interviewed golf courses ensure that they are supplied with reclaimed water or can count on it in the future if water resources are scarce, as is the case of the Atalaya golf course, located in Estepona. Their General Manager, Andrés Sánchez, has declared that “we are already buying recycled water to fill the lakes and maintain them”, as well as studying “other types of grass so that the greens can withstand the low quality of the recycled water and less irrigation”. He assures that 90% of the water they use is recycled.

The General Manager of the Azata de Estepona golf course, Agustín Alonso, has assured that “we are not suffering from the drought in the sense that we have recycled water with which we can irrigate”, despite the fact that “rain is what we all need because our reserves are running low”. According to him, the countryside is supplied “with recycled and bogged water that we collect from the rain and store it”. In addition, it has been applying other measures for years, such as “irrigation control”.

The General Manager of El Chaparral golf course, located in Mijas, Domingo Gavira, pointed out that in his case the drought has little effect because they work with 100% recycled water, a resource that the company has been using for many years. He pointed out that “I am not going to change any practice that I was doing before and I am going to continue the line I have been following up to now”.

The General Manager of Mijas Golf, Lorenzo Pérez, pointed out that “we irrigate with recycled water, and whether there is a drought or not Acosol has to purify the sewage water”, which is why he assured that “for now it hasn’t affected our supply at all”. In addition to this, there are other measures to optimise resources such as the implementation of “a summer lawn, which needs 75% less water and thanks to this we don’t irrigate even half as much, as well as an irrigation control system”.